Celebrate this Halloween with seven bloodsucking chillers and a miniseries featuring a variety of vampires! You’ll have to start early in the morning to cram in all the capes, stakes, and heartaches (get it?). We recommend watching the movies in the order below and topping off your evening with the 1979 minseries adaptation of Stephen King’s Salem’s Lot.

Brides of Dracula (1960) – No Dracula and no Christopher Lee? No problem–as those constraints inspired Hammer to reach new heights with an intelligent vampire tale filled with fine performances, an imaginative plot, and the best ending of any vampire movie. If you want to opt for a more historically significant Hammer vampire film, you can substitute Horror of Dracula (aka Dracula). It also has the bonus of featuring Christopher Lee as Dracula. 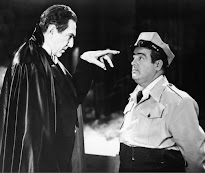 Abbott & Costello Meet Frankenstein (1948) – Take a laugh break with this funny, well-made send-up of Universal’s 1930s and 1940s monster movies. The best scenes are the ones between Lou Costello’s buffoon and Bela Lugosi’s Dracula, who wants to transplant the former’s brain into the Frankenstein Monster. Who thought Bela could play such a perfect straight man?

The Last Man on Earth (1964) – Writer Richard Matheson didn’t care for this Italian-made adaptation of his popular novel I Am Legend, in which a plague of vampirism wipes out most of the Earth’s population. I think it’s an inventive, effective fright fest with a strong Vincent Price performance. Despite its budget limitations, it’s superior to the semi-remake The Omega Man (1971) and the disappointing I Am Legend (2007).

The Night Stalker (1972) – Cynical newspaper reporter Carl Kolchak (Darren McGavin) discovers that a vampire is roaming the streets of contemporary Las Vegas–but no one will believe him. This made-for-TV movie became the highest rated television for many years. It spawned a pretty good 1973 sequel The Night Strangler and the short-lived Kolchak: The Night Stalker TV series.

The Fearless Vampire Killers (1967) – Roman Polanski’s parody of vampire films is so good that it stands on its own as a first-rate horror picture. Polanski displays an uncanny understanding of the genre, from the snowy setting to the famous dance of the vampires (the film’s original title). Sharon Tate exudes charm as the heroine, proving she was more than just a pretty face.

The Lost Boys (1987) – A divorced mother and her two teenage sons relocate to Santa Carla, California, to live with her father. The older son’s sudden interest in a mysterious girl leads to his involvement with a gang of teen vampires. It’s stylish and fun, if a bit lightweight. You may choose to substitute one of two other above-average 1980s teen vampire pictures: the more serious Near Dark (1987) or the more lighthearted Fright Night (1985), which features a delightful performance by Roddy McDowell as a Peter Cushing-like TV horror host.

Salem’s Lot (1979) – Stephen King’s bestseller about a vampire snacking on the residents of a small New England town works well as a miniseries. Director Tobe Hooper emphasizes atmosphere over shocks for the first two hours, which allows viewers to enjoy the fine supporting performances from Lew Ayres, Ed Flanders, Bonnie Bedelia, and especially James Mason as the vampire’s sinister, but suave, caretaker. Salem’s Lot features one of the most iconic scenes of network television horror: teen vampire Ralphie  Glick hovering in the fog outside his brother’s bedroom window, pleading to be invited inside. (For the record, a later similar scene with Danny Glick is almost as effective).