It’s a story we all know.  As the Planet Krypton reaches it’s last moment, Jor-El puts his infant son in a ship, hoping to send the boy to safety.  As the ship prepares to take off, a puppy hops into the ship and joins the boy on his amazing journey.  OK, the puppy part you may not have known.  Until now.

It’s another day in Metropolis.  Krypto (Johnson) wants to go for a walk.  However, when your master is Superman (John Krasinski), it’s not as easy as it sounds.  Further complicating things for the Super-Dog is Supes on-going relationship with Lois Lane (Olivia Wilde).  Still, compared to what’s going on at the local animal shelter, things aren’t too bad.

Well-acted, with a very clever script, “Super-Pets” is a fun adventure with an important message, but one that doesn’t hit you over the head.  In the aforementioned animal shelter, we are introduced to a group of pets longing to be loved.  They are led by Ace (Hart) a hound who keeps his fellow animals feeling positive by promising them that, should any of Ace’s escape plans work, he will take them all to “the farm,” a place where all animals are loved.  Among his pals are PB the Pig (Vanessa Bryer), Chip, an unusually odd squirrel (Diego Luna) and Merton (Natasha Lyonne), an older, and very nearsighted, turtle.   Their lives change when Krypto is brought to their shelter. 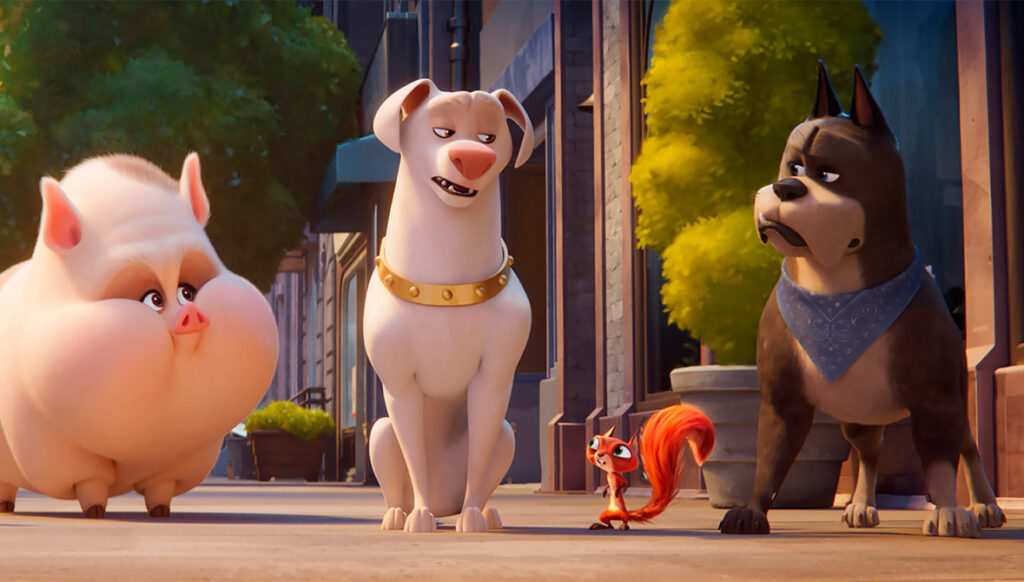 I loved the vocal performances of the cast.  In the past two decades, animated movies are no longer looked at as “just a gig” by actors.  The actors here give strong, layered performances, which lend themselves to the story being told.

The script is full of DC in-jokes, many of them involving Batman (an excellent Reeves),  Whether he is justifying label of “superhero” – he actually has no super powers – or worrying if a toy in his image is actually licensed, the Dark Knight is a hoot.  Other Justice League members show up as well, and you almost hope that the next Justice Leage movie is animated with the same vocal talents.

In the end, it’s a story about believing In yourself, and your friends.  Or, in this case, your Super-Friends.