Skip to content
HomeNewsHistory Made In The Pho3nix Sub7 Sub8 Challenge

SINGAPORE, June 5, 2022 /PRNewswire/ — History was made in the Pho3nix Sub7 Sub8 Challenge when Kristian Blummenfelt became the first male to go under 7 hours and Kat Matthews became the first female to go under 8 hours in an iron distance triathlon. With the event encompassing a 3.8km swim, 180km bike and 42.2km run consecutively, Blummenfelt finished in a remarkable time of 06:44:25 with Matthews finishing in a staggering 07:31:54. In doing so, Kristian and Kat write their names in the history books of sporting achievements.

The historic occasion was hosted at Germany’s Dekra Lausitzring, with the swim taking place in the nearby Lake Seftenberg, chosen after an exhaustive global search for the fastest possible course which accounted for a multitude of factors including time zone, climate, wind, altitude, track surface and layout.

Speaking on his incredible accomplishment, Kristian Blummenfelt said:
“Today was about making history but also about proving that all goals – big and small – are worth chasing. This has been a goal of mine for as long as I can remember, and I couldn’t have done it without the support of my incredible team – thank you.”

Kat Matthews said after her outstanding achievement:
“The journey to get to this challenge has been tough and I wouldn’t be here if it wasn’t for the amazing team I’m surrounded by. But today was about much more than going Sub8. It was about showing the world that there’s no such thing as ‘impossible’.”

Event organiser Mana CEO, Chris McCormack, said:
“I’m truly gobsmacked. The Pho3nix Sub7 Sub8 Challenge was about inspiring people and watching Kristian and Kat go Sub7 and Sub8 was to see them defy what many said was ‘impossible’. I hope that everyone watching today feel inspired by these incredible athletes and now challenge themselves to defy their own impossible. Thank you to everyone involved. The athletes. The pacemakers. The team who made what we just witnessed happen. Today was extraordinary.”

Assets can be found here.

More information about the Pho3nix Foundation is available at www.pho3nixfoundation.com. 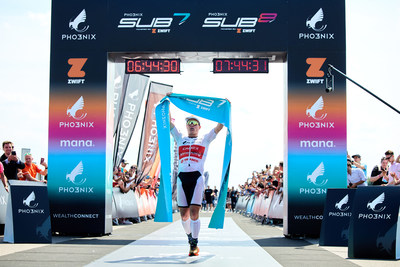 Disclaimer:
This Press Release has not been vetted or endorsed by The Eastern Herald‘s editorial staff.