Skip to content
HomeNewsNepal is planning to move Everest base camp because of rapidly thinning glaciers, erosion from climbers
Tents set up at Nepal’s Everest Base camp on Khumbu Glacier, Mount Everest, on September 15, 2019.

In order to ascend Mount Everest, climbers have to pass through one of two starting points. But the southern site in Nepal — the most popular starting point to summit the world’s tallest mountain — is located on top of a thinning glacier that’s becoming increasingly unsafe amid climate change.

As ice on the glacier close to the base camp slowly melts, Nepal is preparing to move the campsite down the mountain. Glaciers and ice sheets are melting at accelerated rates because of human-caused climate change: As temperatures rise, the glacier on the world’s highest mountain, like other glaciers around the world, is retreating rapidly.

“We are now preparing for the relocation and we will soon begin consultation with all stakeholders,” Taranath Adhikari, director general of Nepal’s tourism department, told the BBC. “It is basically about adapting to the changes we are seeing at the base camp and it has become essential for the sustainability of the mountaineering business itself.”

The potential relocation follows recommendations from a committee set up by the government, which oversees mountaineering at Everest.

A 2018 study found that the Khumbu Glacier close to the base camp was thinning at a rate of 1 metre per year. Now, according to Nepalese authorities, it’s unsafe. Where the base camp currently stands, mountain climbers contend with cracks on the ice, erosion, and growing streams of water due to ice melt.

“We see increased rock falls and movement of meltwater on the surface of the glaciers that can be hazardous,” Scott Watson, a researcher at the University of Leeds, told the BBC. 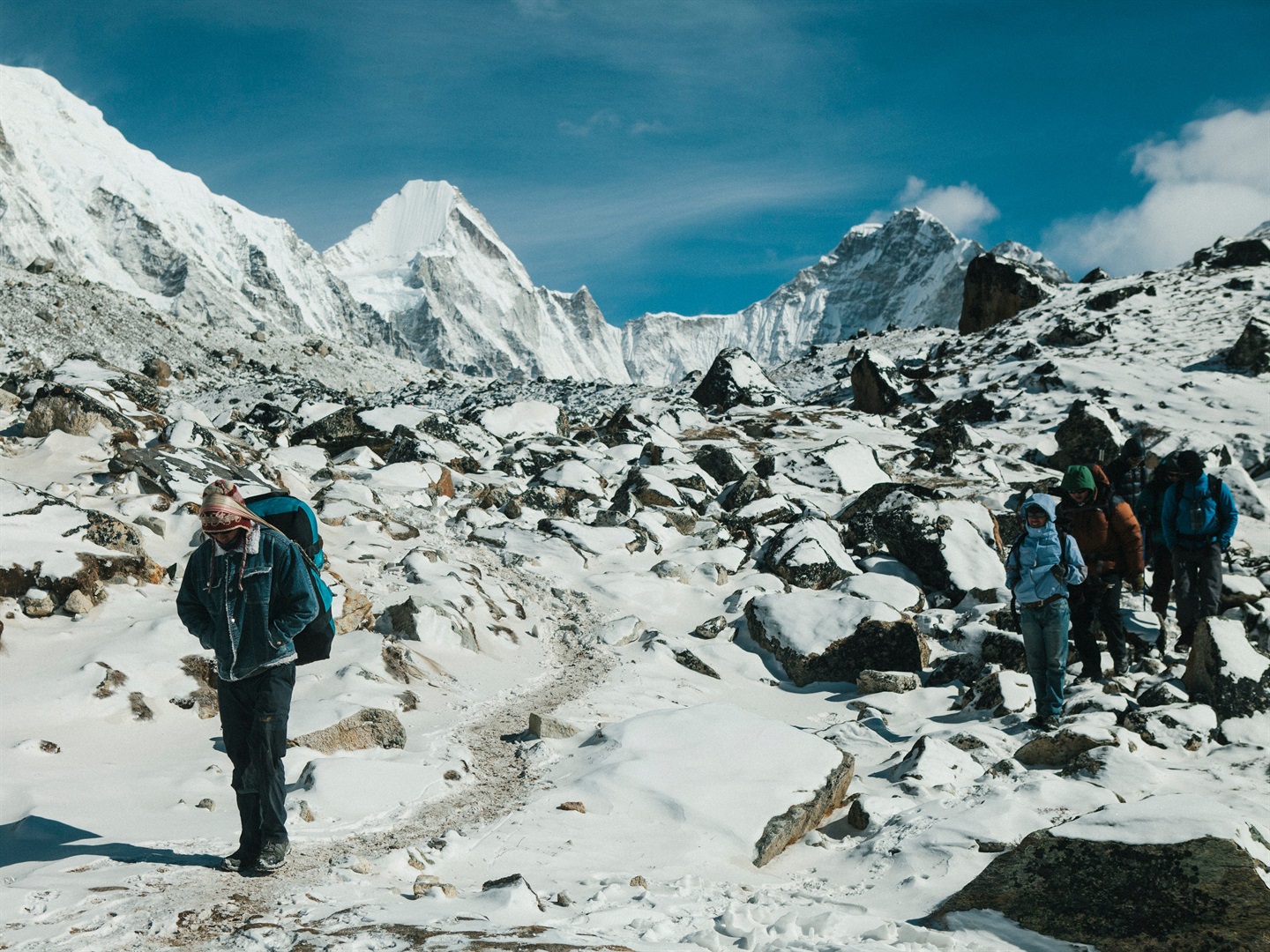 A line of trekkers walk through fresh snow beside the Khumbu Glacier, near the base of Mount Everest and Everest base camp, on February 13, 2015.

The sheer number of people passing through the camp, and the footprints, debris, and waste left on the mountain are a concern. The camp is used by around 1,500 climbers every year. People urinating at the camp, to the tune of 4,000 litres of pee every day during in peak season, along with runoff from kerosene and other waste products, also impact the glacier.

The base camp currently sits at an altitude of 5,364 metres above the mountain’s snowline. Plans could shift it as much as 400 metres lower, to an ice-free area. A final decision has not been made, nor has a new base been identified, according to Nepalese authorities. Once plans are finalised, the relocation could come as soon as 2024.