Skip to content
HomeAnimalsWorking Together to Save American Burying Beetles

Mandy Pritchard, Team Leader at the Cincinnati Zoo’s World of the Insect is currently out in the eastern Sandhills of Nebraska with Cincinnati Zoo World of the Insect keeper April Pitman and colleagues from The Wilds and Nebraska Game and Parks. They are working together to collect threatened American burying beetles (ABB) and release their offspring back to the wild in Ohio.

The ABB was once found everywhere in the eastern United States but because of a handful of issues (habitat destruction, increased scavenger populations, etc.) they are now only found in a few counties in a few states like in the eastern Sandhills of Nebraska!

Here’s a look at Mandy’s trip out West to help save this species:

In the eastern Sandhills of Nebraska is a population of American burying beetle (ABB), a federally threatened species that have been extirpated from over 90% of its historic range.

World of the Insect keepers from the Cincinnati Zoo have been working to reintroduce this species to Ohio since 2012. 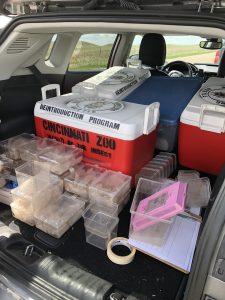 Our keepers along with colleagues from The Wilds and Nebraska Game & Parks headed to the Sandhills this week to collect some beetles to support reintroduction efforts in Ohio. 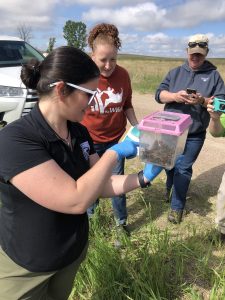 To catch the beetles, we use simple pitfall traps baited with carrion. ABBs are nature’s undertakers and literally bury small animal carcasses which they use to raise their young. 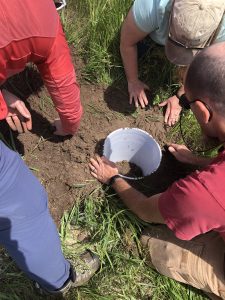 Once we sink the trap into the ground, we put a cover on top to protect the beetles from rain or sun. We put soil on top to help hold it in place. 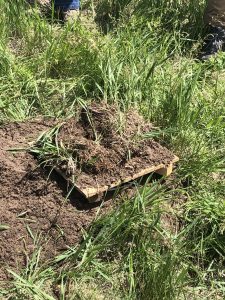 The next morning we come back and check the traps to see what we caught!

We pull out all the insects that fell into the trap overnight, keeping any ABBs and releasing any other species. 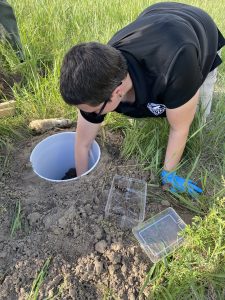 This year the efforts were really successful and the team caught 264 ABBs total! 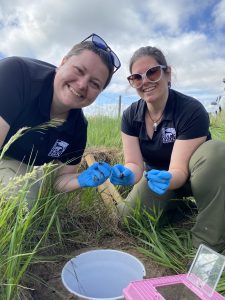 The team records locations, number of beetles, weights, and measurements of the individual beetles every year. That information helps scientists with Nebraska Game & Parks and USFWS keep an eye on the population over time to help guide decisions regarding this threatened species. 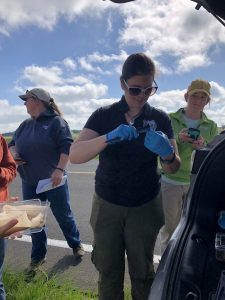 Once the beetles are weighed and measured, the majority of them are released. The team kept 30 males and 30 females who were set up in individual containers with all their relevant data. The keepers will drive these ABBs back to Ohio to breed in managed care to produce a reintroduction population for 2023!