If you’re confused between ZenWiFi Pro XT12 vs ZenWiFi Pro ET12, you’re not alone. Differentiated by a single letter, their names are a mean trick Asus plays on us all.

While there are a lot more similarities between these two than their monikers, they are also very different mesh systems.

This ZenWiFi Pro XT12 vs ET12 matchup — intended to be the supplement to their in-depth reviews — will help you walk away knowing exactly which to buy.

And that’s important because while each can be excellent in its own way, getting the wrong one for your situation will prove problematic, to say the least, considering they are expensive hardware to boot.

These two mesh sets have just one letter in their name that sets them apart: XT12 vs ET12.

Physically, the two look identical. You can only tell them apart when you turn them on. Now the light on their “fronts” — it’s hard to know which side is the front — will show their full name. You can also check their undersides where their models are printed.

And there are even more similarities, as you’ll note in the hardware specifications below.

While both are Tri-band hardware, they are of two different types.

Dual-band vs Tri-band vs Quad-band — what’s really going on?

Additionally, on the 5GHz-2, the XT12 supports the latest UNII-4 portion to have a third 160MHz band which is free for DFS channels. By default, the ET12’s 6GHz band doesn’t have to deal with DFS.

The way they are, the ET12 must use all of its three bands for clients; it can’t dedicate any of them solely for the backhauling job. Consequently, in a wireless backhaul setup, whichever band works a the backhaul will lose 50% of its bandwidth — it’s the inherent signal loss.

In the case of the XT12, the 5GHz-2 band can work solely as the backhaul, allowing all bands to work at their full capacity. And the support for UNII-4 means the backhaul can consistently deliver the best possible performance.

While you can use both mesh systems with wired- or wireless backhauling, the XT12 is designed for a wireless setup, and the ET12 works best in a wired environment.

And that’s the most significant difference between the two. One more thing: the ET12 is $100 more expensive.

ZenWiFi Pro XT12 vs ET12: Can I use both together?

Technically, we’re supposed to be able to use the XT12 and ET12 hardware together in a single mesh system, per the way AiMesh works. And eventually, that likely will be the case.

For now, in my trial, that was not possible yet. No matter how much I tried, I couldn’t link them together. The AiMesh setup process would just fail every single time. And I tried many times.

While all this will likely change via firmware upgrades, mixing Wi-Fi standards is never a good idea in a mesh setup, and you should only do so, which you shouldn’t, with wired backhauling. Else the management of different Wi-Fi “banding” can get too complicated. 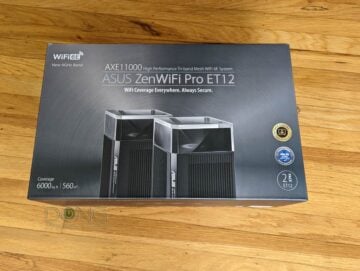 Excellent performance and coverage as a standalone router

In my trial, the XT12 and the ET12 delivered similar real-world performances. However, in a mesh setup, the XT12 is better because its backhaul band — the 5GHz-2 — is dedicated and has a much better range than the ET12’s default 6GHz band.

With wired backhauling — not shown here — they were very similar. And the support for the 6GHz band is the ET12’s advantage. 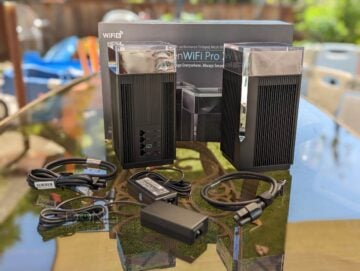 No 5Gbps or 10Gbps Multi-Gig, bulky, no USB, only four network ports

ZenWiFi Pro XT12 vs ET12: Which you should buy

You can buy either or none no matter your situation and the world will keep spinning for the foreseeable future.

But in case you’re contemplating between the two, here’s the recap for a smart purchase:

The ZenWiFi Pro XT12 is traditional Tri-band hardware. As such, it works great in a fully wireless mesh setup. You should get it if you live in a large home and are too lazy to run network cables.

The Zen Wi-Fi Pro ET12 is a new Tri-band hardware — it works best with wired backhauling. Get it if you intend to use a network cable to link the hardware.

If you only need a single unit, my take is the ET12’s support for the 6GHz band is more valuable than the XT12’s support for UNII-4 (or the fact it has a second 5GHz band). That’s partly why the former is more expensive.

Want to see more Wi-Fi solutions compared against each other? Check them all out here.

Wanna be in touch? Sign up for DKT newsletter!